The Artistic Undertakings of Caliph al-Hakam II in Cordoba 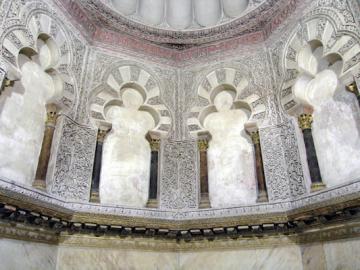 The two great artistic undertakings of the Hispano-Umayyad caliphate, the palatine city of Madinat al-Zahra and the enlargement of the Great Mosque of Cordoba, are largely attributable to the patronage of al-Hakam II (r. 961-976), first as prince and later as caliph. Both constituted a perfect visual representation of Umayyad ideology and one of the most potent instruments of legitimation of the caliphal title. Then began the greatest period of creativity and wealth in the art and culture of al-Andalus. Many studies have addressed the history of the caliphate insisting on the figure of 'Abd al-Rahman III, the political and military architect of the new state, as well as on the meaning of the Cordoban caliphate within the Dar al-Islam. However, while modern historiography tends to focus on the first caliph, Arabic sources extol the personality of his son al-Hakam II, his inclination to knowledge and his patronage of the arts and sciences. In this lecture, I would like to focus on this second caliph who played an essential role in the visual construction of the Caliphate of Cordoba and analyse the main artistic undertakings of the caliphate within a broader cultural context.