Intricate Geometries from Byzantine Church to Umayyad Palace: Motifs and meanings in the mosaics of late antique Syria 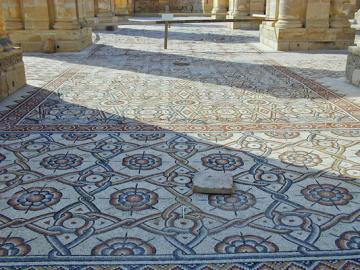 Since its discovery in the 1930s, the mosaic pavement of the bathhouse at Khirbet al-Mafjar, Hisham’s Palace, near Jericho, has delighted historians of Islamic art. The pavement is the most elaborate extant floor mosaic from an Umayyad building. While scholars have considered the mosaics, they have tended to focus on the figural panel of lions hunting gazelles that decorates the reception room (diwan) on the northwest side of the baths. This paper instead focuses on the geometric mosaics of the rest of the building, placing them in their regional Syro-Palestinian context as the heirs of a great tradition that was especially strong in Syria. Building on recent work on the mosaics, this paper posits that the mosaics are not only “deeply rooted in the artistic world of Late Antiquity” (Ali and Guidetti), but have more specific roots in the fourth-century experimentation with geometric patterns as suitable motifs for the floors of churches and synagogues in Syria, the region at the center of the Umayyad world. Intricate geometries not only kept potentially problematic figural imagery off the floor, but also opened up new worlds of abstraction and meaning. Tracing the movement of these geometric motifs within Syria opens up a window into artistic and cultural practices between Byzantium and the Umayyad Caliphate, and highlights the transfer of patterns and meanings between the two, potentially shining new light on the significance of similar motifs in Umayyad and later religious buildings (e.g. the Dome of the Rock).