Petrifying Power: The Use of Hard-stone Spolia in Norman Sicily (12th - 13th centuries) 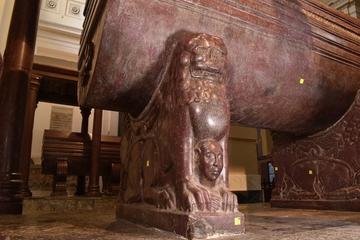 The Gerda Henkel Foundation have produced a series of videos about this project, which can be viewed at: https://lisa.gerda-henkel-stiftung.de/koeniglicher_steinklau?nav_id=8472...

Both red porphyry and green lapis lacedaemonius (also called “green porphyry”) were highly prized materials employed to decorate buildings and realised statues in the imperial Roman world. Each stone came from a single source: red porphyry from the quarries at Jabal Abu Dukhan, in the eastern Egyptian desert; green porphyry from Krokees in the Peloponnese. The mining of both stones was confined to the first three centuries A.D. By the beginning of the 4th c., it was virtually unobtainable, and the only source of porphyry was ancient Roman spolia.

In the Middle Ages, the Norman kings of Sicily made extensive use of porphyry and other Roman hard-stone spolia, especially to create the very elaborate opus sectile compositions that decorate the floors and walls of the Norman churches and palaces. These valuable spolia were not acquired haphazardly from the ancient ruins of Sicily but were rather imported from Rome. This ambitious project for the systematic reuse of Roman spolia was an important part of the carefully planned project to construct a distinctive and politically eloquent art and architecture for the new kingdom of Sicily.

This group of medieval monuments has been the subject of art history studies but the context of production and the technology required to shape hard-stone spolia, remain mainly unexplored and largely based on assumptions. Historians have generally accepted that the technology required to work hard-stone had been largely lost in Latin West during the middle ages, to be only rediscovered during the Renaissance.  However, for the brief period from the coronation of Roger II (1130) to the death of his grandson, Frederick II (1250), red porphyry was exceptionally employed for a small group of three-dimensional architectural elements and objects, some of which were decorated in high relief. The most spectacular examples are the porphyry sarcophagi of the Norman rulers and Hohenstaufen Emperors, preserved in the cathedrals of Palermo and Monreale. These unique monuments in porphyry yield evidence that the technical knowledge, necessary to sculpt relief decoration in hard-stone, was known in the Middle Ages. What was the technology employed and from where it originated? Where exactly were they made and who were the carvers that handled the tricky task to sculpt the relief-carved ornaments?

To answer these important questions, pertaining to history of Sicily and history of technology, we have adopted a multidisciplinary approach, mainly based on the multi-scale analysis of the tool traces still preserved on the surface of the porphyry items (low magnification digital microscope and tribological analyses). The data obtained are next compared with technical traces generated during experimental reconstitutions of the tools and carving techniques potentially employed by the ancient sculptors. Eventually, the comparison of both types of tool traces enables us to identify the processes and equipment used to sculpt the medieval items. 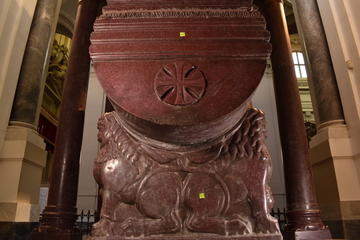 The processes identified on the Norman sarcophagi are subsequently compared with those used for the production of relief carved porphyry items in various centres and periods (especially from classical Antiquity, medieval Italy, Byzantium and the Islamic world). We hope thus, to identify the origin of the technology employed in Medieval Sicily as well as possible transfers of know-how (and/or craftsmen?) from other centres of hard-stone carving.

The second objective of this first year of the project is to elaborate a methodology to identify from which exact building or monument the spolia was taken in Rome. To this aim, we are experimenting with a series of non-destructive in situ systems analysis (spectrometry and petrographic examinations at low magnification) of the different blocks of porphyry. The data obtained will be entered in a relational database to eventually identify correspondences between the diverse items in porphyry both in Rome and Sicily.

The last objective of this preliminary phase of work is to design a future major international and multidisciplinary project, to investigate comprehensively the use of Roman spolia in Norman Sicily and to undertake the first comprehensive inspection of the five Norman royal tombs and analyse the human remains and any other artefacts as found inside the tombs (ancient DNA, radiocarbon, etc.). We hope that this will lead to the development of a long-term conservation programme of these extraordinary monuments and a new interpretative display aimed at a wider audience. It is hoped that one outcome of the project will be to add the porphyry tombs, with the cathedral that preserves them, to the UNESCO list.

Petrography
With the collaboration of Dr Chris Doherty, Research Laboratory for Archaeology and History of Art (RLAHA), Oxford